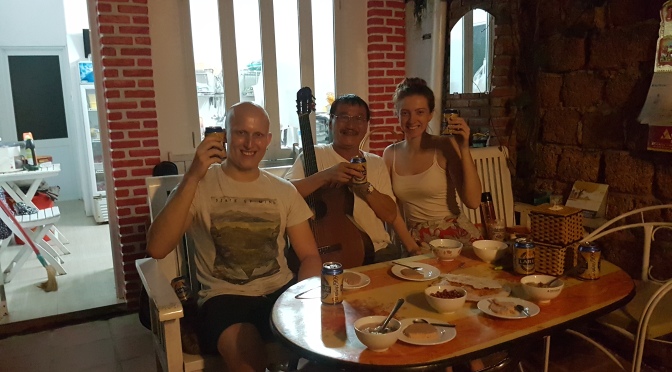 Our final night in Hoi An we got back from spending our evening in the town and then heard a knock on our door to find the hotel owner asking if he could share a beer with him and his friend because it was our final night. We obviously accepted, walked over and before we knew it, we were having a picnic and a party with him. He set out a food selection for us, a few beers later and using google translator to communicate we were all having such a great evening! He got out his guitar and started to sing to us, we both felt truly grateful and realised memories like this are what travelling is all about.

After researching about what to do in Hoi An we really wanted to do some form of tour, we discovered a Bike tour which was free of charge because the people that took you out were students and wanted to practice their English. We didn’t know what to expect, but having to be up at 7 am we hoped it had better be worth it! This was the day we had to check out (usually at 12 pm), our tour was supposed to be 4 hours long and started at 8 am, so assumed we’d be back to the hotel at around 12:30 pm. We explained this to our hotel and they said not to worry that’s fine.

We used the bikes from the hotel for our tour, met up with our group and began our journey. They were all so friendly and probably spoke better English than we did! We cycled to get onto a ferry when we were slightly delayed because there was a boat race going on.

We made it to an island called Kim Bong Carpentry village where we got to see how they made their boats.

We then cycled onto the next stop which was where they made sleeping mats. It was so fascinating to see how this was done and how quickly they did it. We even got to try!

The group we were with were other Londoners, and this one guy was hilarious. The tour guide asked him to sing a song, so he sang ‘Happy’ by Pharrell Williams – of all the songs and all the places, why he chose this song I don’t know! He then started singing nursery rhymes, but here we were, sitting with a bunch of strangers whilst this man sang some karaoke over-watching the locals make sleeping mats – it was just insane!

We moved on, fed some cows, visited a temple and stood in a rice field. We couldn’t have fit more into tradition if we tried! 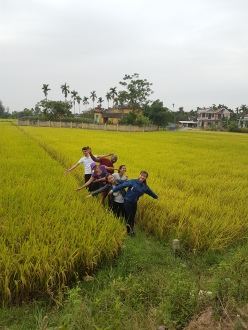 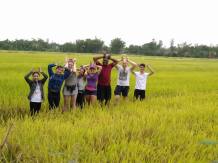 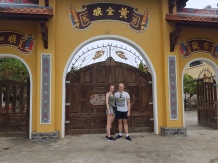 Cycling some more, we made it to a family house where we were shown how they make rice cakes/noodles. This was very interesting and gave us an insight as to how their local dishes are cooked.

We then sat outside with the tour guides, and they asked us to teach them some English whilst they taught us some Vietnamese. She handed us a notepad and asked us all to draw each other – this was the result! 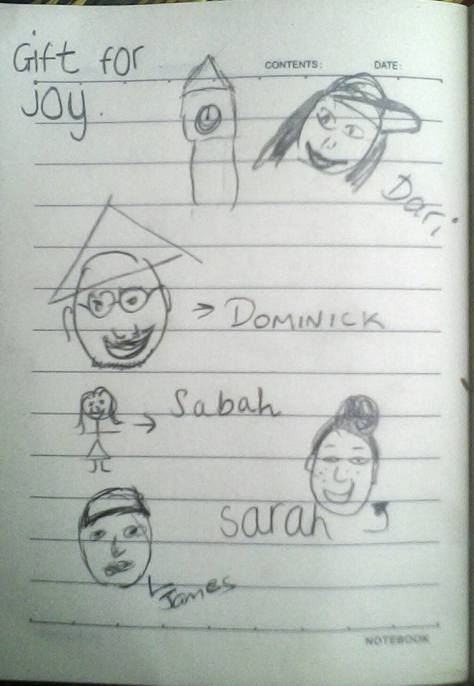 Again, after more laughter, it was time for us to leave. We got carried away with time, and lets just put it this way – never expect ANYTHING or ANYONE to be on time in Asia. It was now 13:00 and we were due back by 12:30 to check out and we still had a ferry to get back and a 15-minute cycle back to the hotel. We made it back by 13:45, but the Receptionist said it wasn’t an issue at all. We checked out, but they gave us a key to another room and said that we can shower before our long bus journey. We went back to our local restaurant and had some dinner, then back to the hotel as we waited around for the sleeper bus to pick us up. As we were waiting, our Receptionist had gone out and got us some baguettes for our dinner (free of charge) – another lovely gesture from a great hotel. If anyone is planning on visiting Hoi An, then 100% stay at Red House Homestay. They couldn’t do enough for us, and lots of nice gestures throughout our stay.