The next day the plan was to go to the Grand Canyon. We set our alarms nice and early, supplied sun cream all over and went to leave when we saw the weather was absolutely chucking it down with rain. No chance was we going to leave the hostel with weather like that, let alone drive a moped in it. We were so disappointed but just agreed that we would do it the following day as the weather forecast was due to be better. We pretty much wasted a whole day because from 8 am until about 3 pm it was constantly raining. We expected to have days like that where our days don’t go to plan, but it gave us time to catch up on writing the blog etc.

As soon as it had stopped raining we eagerly left the hostel and went to explore around the area. We took a slow walk around the town and that evening went to a back street where we got some food. We sat in a street food market and enjoyed a Pad Thai each & enjoyed a refreshing beer. 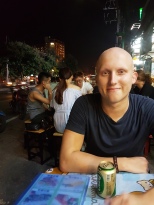 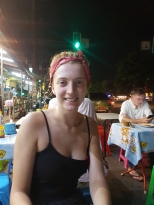 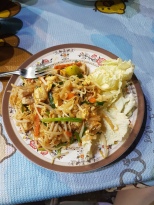 We enjoyed our meals thoroughly & enjoyed the fact that we didn’t get charged for our beers – bonus! We went to a bar afterwards and had a soft drink whilst I whopped James’ bum at pool (I will make sure I remind him of that moment for the rest of my life). Commiserations.

The following day we were due to go the Grand Canyon, again. This didn’t happen as unfortunately, I was ill. We had to move hotels as we only booked for 4 nights. We said goodbye to S.K Guesthouse 2. All we would say is it’s a great hotel in a great location, however, be sure to get a room with air-con and don’t cheap-out like we did.

We had to shift ourselves from the bed, pack up our bags & make our way to the new hotel. We got there about 9:30 am and had to wait until 10:45 am to check in. When it was time, we were taken to our room and it was lovely and spacious (just what you need when you have massive bags that take up a quarter of the room). Our new hotel was called Mandala Guesthouse which is perfect for us in a great location.

We relaxed for the day so I could rest up and focus on getting better. By the end of the day, I was feeling 100% better so we went straight out for some dinner and then headed back to our cosy hotel.

The next day we woke up nice and early and decided we would hire a moped and drive to the Doi Suthep-Pui National Park. We agreed to do this rather than the Grand Canyon first because it wasn’t as long a journey compared to Grand Canyon and James wanted to get some practice on the moped. We hired our bike with a company called Bamboo Bikes where you can hire a bike for the day for as little as 99THB (about £2.70). We went for a slightly more expensive one (about £4) because we were going uphill so required a bike with a bit of power. 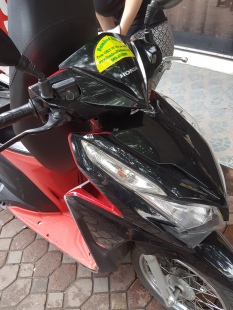 James tested driving it around the backstreets first and with all due respect to James – it was scary to watch, to say the least. After getting used to it we ventured out and began our nerve-racking journey to the National Park. We got 10 minutes away and got pulled over by the Police – brilliant start. Feeling slightly uneasy and nervous, we obeyed every word as quickly as possible because we really didn’t want to imagine what life inside a Thai police station would be like. He asked James for his driving licence, feeling 100% confident he handed it over by which we knew it wasn’t going to be that simple from the stern look in the cop’s eyes. Here we go. We were informed that we required an International Driving Permit, we were completely unaware of this and just assumed that our normal driving licence was sufficient enough but of course not. We got fined 400 baht (luckily only about £8) and were given a slip which gave us permission to ride the bikes for 3 days. We were more than happy to hand over the money rather than being put in handcuffs and taken to the police station. It was still so incredibly annoying considering how many people don’t get pulled over but yet within our first 10 minutes we did. But hey ho, all part of travelling I suppose.

The journey was a lot of fun and going uphill into the mountains was incredible- we felt like we were part of a movie. We went straight up to see Wat Phra That Doi Suthep, 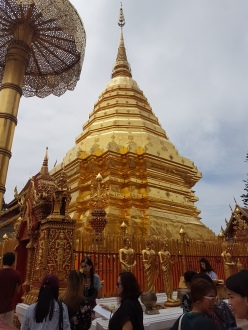 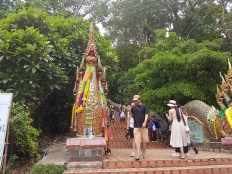 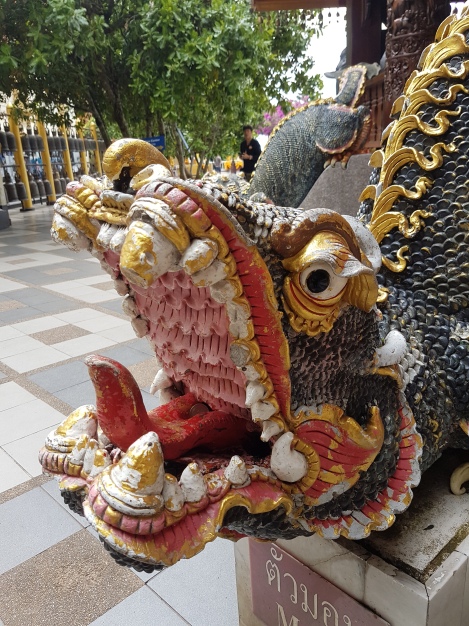 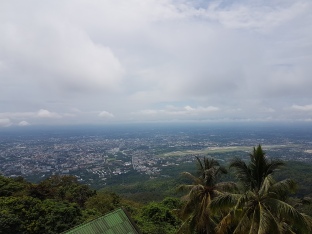 We stayed up for about an hour and stopped in a cafe for a while whilst we embraced the views before continuing to explore the mountain. We hopped back on our moped and rode back down the mountains to discover the Doi Suthep Waterfall. Unfortunately, we had to pay to enter which was 100THB pp (just over £2) and then another 20THB (about 50p) for the moped. It was fantastic to see although we wouldn’t recommend paying to see it considering there are many other free waterfalls in Thailand.

We had enough for the day so we returned the bikes and went to our hotel to make ourselves look (and smell) presentable again. We decided we would have a night in so we headed to 7-11 (the BEST supermarket in Thailand) to get some toasties. I feel like we could dedicate a whole post to these toasties because they are out-of-this-world! I don’t want to bore you so I’ll keep it short, but they are just unreal. We had 2 for dinner along with some snacks, don’t worry mum/s we had a fruit juice so we did get 1 of our 5 a day. A chilled night in went down a treat and we definitely needed it!

The following day was by far one of the best days of our lives! We took a drive to Grand Canyon Waterpark. This isn’t your everyday ordinary waterpark, it was an old quarry filled with water covered with inflatables. We paid only 350THB pp (nearly £8) to get in and we could stay there for as long as we wanted. We stayed for about 3 hours but we could have stayed so much longer but we wanted to get back before the traffic started to build up. I’m going to let the photos/videos do the talking and I’m sure you will be able to see how much fun we had!

We would 100% recommend going here, it is perfectly safe with staff members scattered all around & I guarantee you would not leave the park without a huge smile on your face (unless you don’t like water, but then I guess that would make you stupid for going to a waterpark?! At the end of the day, James safely drove us back to the hotel where we had a quick nap and headed out for some drinks. We had the best day and a great evening to top it off.

One thought on “The Rest Of Our Days In Chiang Mai”