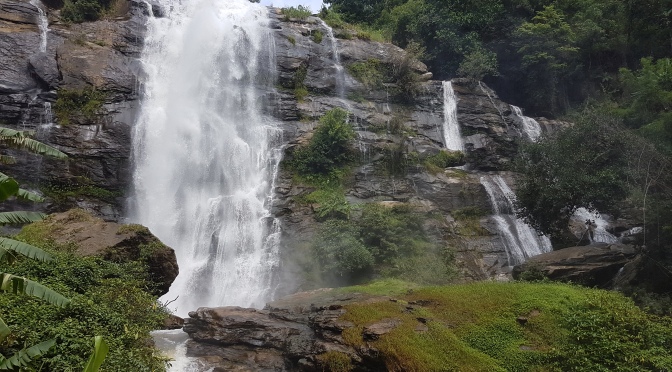 We jumped on our minibus at 12:15, we saw Lauren and Ollie squashed right in the back with the bags looking ever so cosy. We started to drive and the journey was shocking, yet again we felt like we were on a rollercoaster. The driver was clearly very eager to get to Chiang Mai. Nearly everyone on the bus was feeling sick and had bags over their mouths, and then we did a stop off and all I could hear was people being violently sick. Everyone looked a dirty shade of white but luckily there was only about an hour and a half left of the journey mostly on straight roads. Everyone was so relieved to get off the bus and I’m not surprised.

We walked to our hostel (we stayed at Mandala Guesthouse again because it was perfect for us). We dropped our bags and all went for some lunch and then for a splash in the pool.

We decided that because our room had a kitchen/seating area we would grab some drinks and enjoy them before going out that evening. We had a lot of fun and ended up playing the game ‘Heads up’.

It got to the point that we were laughing so much our bellies hurt & James ended up crying on the floor. We finished our drinks and went to get some Pad Thai from the Street Food Market. We asked just for ‘little spicy’ but it was so spicy our eyes were watering. We were only given chopsticks to use and it was an embarrassment watching the guys attempt to use them. It was quite literally the blind leading the blind. (Sarah forgets to mention the little tantrum she had when she couldn’t work hers!) 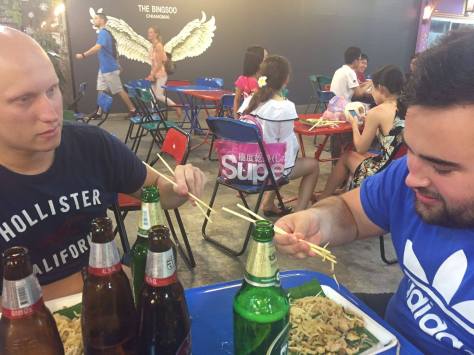 We grabbed some beers from 7/11 and walked around whilst looking at all the different stalls.

We then went to a bar called ‘The Playhouse’ where they had a beer pong table and myself & Lauren were still pretty cocky that we won at pool so we challenged them to a game of beer pong. Unfortunately, us girls were losing miserably so we just gave up. But we then played pool after and GUESS WHO WON?! – THE GIRLS, AGAIN. I’ll be honest, they won ONE game, but so did we and that’s all that matters.

We had an incredible night and was so happy that we met them both. The following day Lauren & Ollie were due to leave to go to the islands, so it was an emotional time for us saying goodbye. Everyone was slightly hungover and we felt so sorry for them having to sit on a plane. We said our goodbyes but agreed that we would try and meet up again at some point. Meanwhile, we had a chilled day of sitting around the pool and catching up on the blogs because a certain couple totally distracted us the previous few days (only joking!).

We went out that evening for some street food before heading back to the hotel. The following day we had booked a tour to go to Doi Inthanon National Park, the highest point in Thailand. We woke up, grabbed some toasties (obviously) and was picked up at around 8 am. The group seemed to be pretty boring, nothing like Ollie & Lauren. The first stop was the Wachirathan waterfall which was massive. We managed to get some great photos. 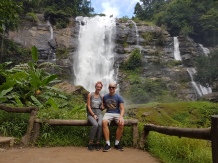 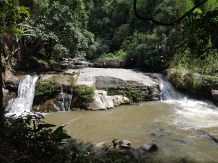 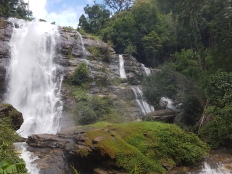 The mist felt so refreshing I didn’t think I was going to get James to leave. We then went to the Karen Hill tribe village. They showed us where the locals make the clothes and explained that the single ladies would wear white until they get married then they have to wear another colour – the tribal lads must love that, they can spot their prey from a mile off. We were then allowed to walk around the village for 20 minutes but we didn’t make it very far round because there was a bundle of puppies who just wanted attention. This was like our dream – a village of puppies 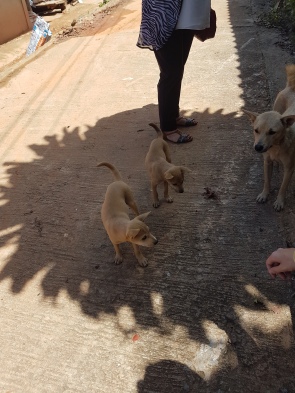 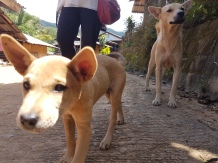 James practically had to drag me away from them because I could have quite easily stayed there with them forever, I was their new mummy now (i wish). Back in the minibus, we drove to the Doi Inthanon (highest point of Thailand). We were pre-warned that it was going to be chilly but oh my god, it was freezing. Going from about 32 degrees to 14 degrees was a shock to our system. It was like going from Australia to England in the space of 20 minutes. It then started raining and that was when we really felt at home & it almost felt like we were in our natural habitat again. Luckily, we had our rain macs which were a saviour. We had a little Rainforest tour to start with before heading up to the highest point.

The highest point was a little disappointing but we were told that it wasn’t a major viewpoint but at least we can say we’ve done it. We began to head back down the mountain to have some lunch. We were sat next to a couple who clearly was never brought up to share. We had a buffet style lunch where food was just put on the table and everyone helped themselves. The couple next to us sure helped themselves! They had their hands on the rice first and helped themselves to a plate full of rice each. After that, there wasn’t enough for one person let alone another 3. We actually had to ask for more. Inconsiderate. Before turning up to lunch our tour guide started saying that we will be having snake soup for starter. She started to laugh so we thought it was a joke. Completely forgetting that comment we were presented some soup, I tucked straight into it. Then I pulled out the bits of ‘meat’ and realised that our tour guide wasn’t joking. I had been eating snake soup. Yuck!

We had finished our lunch and went to visit a small market which was the final part of the tour. It was a pretty small market all selling the same items. But it was nice to go and see. Back into the minibus, we made our way back to the hotel. We had a great day, although it was a shame we didn’t have better company. Oh well, guess we will just have to put up with each other. We had a pretty low-key evening, just an early night before departing for Chiang Rai the next day.