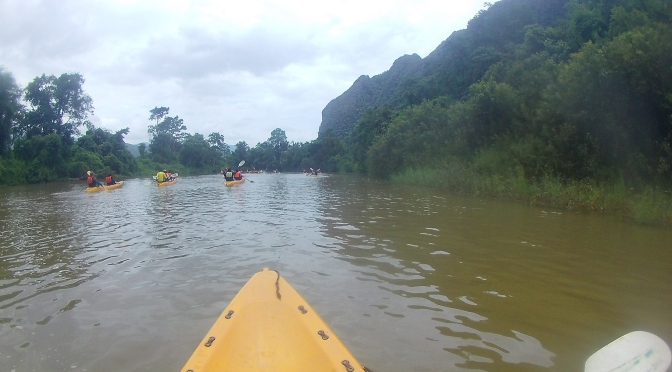 The journey to Vang Vieng wasn’t too bad considering we were stuck on a minivan. However, the driver was fairly good compared to other drivers in SE Asia. When arriving it was, of course, raining, as usual, it was like wherever we would arrive we were always greeted by rain. Vang Vieng is a strange, small city. We were staying the other side of the old airstrip which kept us away from the chaos, only a 10-minute walk from the bus station so we walked. We arrived at our hotel and it was lovely and even better we were upgraded for free. 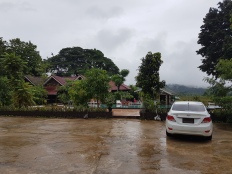 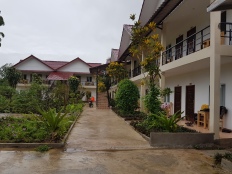 Unfortunately, due to the fact the exchange rate increased, we did have to pay a little more than we would have wanted at £16 per night, but again we had breakfast included so we didn’t have to pay out for that. The resort was called Vang Vieng Boutique Resort with a beautiful swimming pool. Unfortunately, I don’t think countries such as Laos have quite mastered drainage systems. The road leading out from our hotel was flooded nearly every day we were there which wasn’t very pleasant to walk through (especially with flip flops). I would always walk away with more mud than I wanted up my leg!

We then had to walk across the airstrip which looked like a boot-sale carpark which was also flooded. But once we had practically swum through the puddles we were only a 5-minute walk into the town. We discovered an Irish bar called Gary’s Irish Bar which was fantastic! Whilst we are both up for trying local dishes and sticking to their cuisine, there is only so much rice & noodles one’s body can take. A Western dish would always go down a treat, especially spaghetti Bolognese, although it never tasted as good as home.

The day after we explored the area and took advantage of the warm swimming pool overlooking the fields. Unfortunately, there wasn’t a huge amount to do in Vang Vieng so we just had another chilled-out day in the pool and at Gary’s Irish Bar. We booked a tour for the following day for about £8 which was tubing in the cave and then kayaking down the River afterwards, also including lunch.

We woke up and took full advantage of our free breakfast. We got picked up ready for the tour at about 9 am and we were with a group of Korean people again which is a shame because of the language barrier. We were taken to the river and walked through some rice fields to get to the cave. We put on our gear and jumped in our tube and it was so much fun!

We had a rope which we would use to pull ourselves through the cave. I didn’t get any photos of us in the cave because it was too dark. We were in there for about 45 minutes before coming back out and being blinded by the brightness of the sunlight. We walked back through the rice fields and went for some lunch which was delicious. Everyone had finished eating and we clambered into our kayak. Comparing our kayak adventure to when we took them out in the sea it was a completely different experience. The kayak down the river would just flow with the current which made it a lot easier, and much more fun! 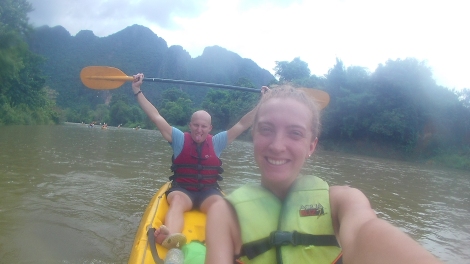 The river we were going down was the same river where they do the tubing. This type of tubing is where you sit in a rubber ring and flow down the river.  Along the river banks there are many bars and the workers would throw out a rope and pull you in if you wanted to visit that bar. A few years ago, there were many deaths from this activity because people got so very drunk and drowned. They have now limited the number of bars that are allowed to be open so that people don’t get as drunk.

Our only advice is if you plan on doing tubing just be sensible, have a good time but just have your wits about you. We got talking to a couple who were on their way back from doing tubing and they were so drunk; they had 5 buckets between them which is a crazy amount. We stopped off at one of the bars during our kayak trip and indulged in a beer to share (we were sensible).

It was an incredible experience with the music blaring and the incredible views. We had a great day & we would highly recommend it, especially for the cheap price.

That evening we decided we would go out for some drinks. We met (another) really lovely couple from Scotland and ended up spending the evening with them enjoying a bar crawl. It was an enjoyable day, but it got to 2 am and we were so ready for bed.

We woke up, feeling slightly fragile but laughing about the night’s events. Another warning is to be very careful of drinks in Laos, we have heard many stories about people getting so overly drunk because of their bleach-tasting vodkas etc. The people we were with that evening, unfortunately, experienced it because they were battered, me and James proudly played mum and dad.

We had a relaxing day but ventured out to book our bus ticket to Vientiane for the next day. We grabbed some food and had a night in whilst enjoying a chip butty. A good night’s sleep was calling our names.