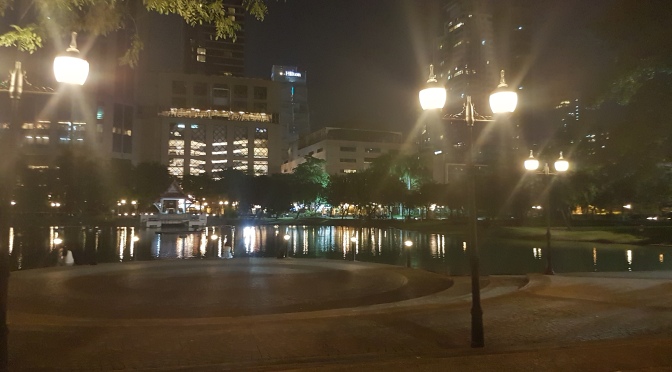 Our flight eventually decided to take off and the flight was delightful, much more delightful than sitting on a 20-hour bus journey anyway. We were served with free snacks and a meal which went down a treat!

Luckily, we booked an airport hotel that evening because we knew we were going to be arriving late, although didn’t anticipate arriving THAT late. We got into a metered taxi and at 3 am we were in our hotel room and for sure going to get some sleep.

We woke up the next day ready to move onto a hotel more in the centre of Sukhumvit. We jumped in a taxi and made it to our new hostel which was called Hide Bangkok Hostel. It was such a lovely room which held so much character with a beanbag in the corner. 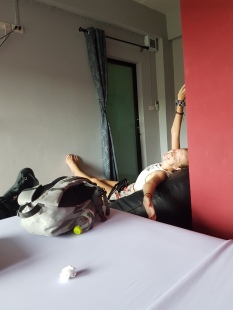 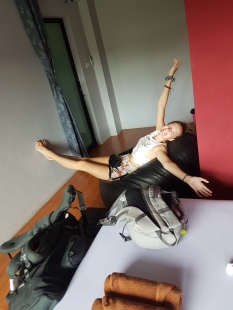 We paid just £12 a night for both of us and even had breakfast included. We would highly recommend staying here, although it was about a 10-minute walk away from the BTS train station, it was extremely comfortable and was a new building, which meant all of the rooms were newly decorated.

We explored the shopping centre Terminal 21 and whilst we don’t even like shopping we felt like we kind of had to check out at least one of the shopping centres in Sukhumvit. The centre had different themed floors i.e. London, San Francisco, Rome etc. It was clever how they had done it, but the London floor didn’t really have a home-feel, despite the strong Underground theme.

We ended up spending about 2 hours in the centre just wandering around and taking in the busy vibe of crazy shopaholics.

That evening we agreed we would stay local to our hostel because we were very tired from the late night the night before. We discovered a Tesco around the corner and they had a mass amount of food stalls in the food court. We decided we would eat there that evening as all the foods were local dishes… and cheap! We treated ourselves to a delicious ice cream from a stall called ‘Dairy Queen’ and it’s like whipped ice cream. If you see one of these stalls then you must get one. After indulging in a beautiful dessert, we headed back and got some sleep.

We were up and ready to go and explore Sukhumvit. We went down and got some breakfast and then went to head out and I crunched on something. About a quarter of my tooth had come out. I wasn’t happy but luckily it wasn’t hurting… and I didn’t swallow it which I guess is a bonus.
We continued with our day and tried not to let it affect our plans, I just had to get on with it. So off we went!

We bought a day pass for the BTS (sky train) which allowed us to hop on and off as many times as we wanted. This, by the way, is totally worth doing if you plan on sightseeing via the sky train, it cost us only 140 THB each (about £3.50). We went to the Siam Paragon, Victory Monument, The Giant Swing, and the Rommaninat Park which we got a canal boat to costing us 9 Baht each. 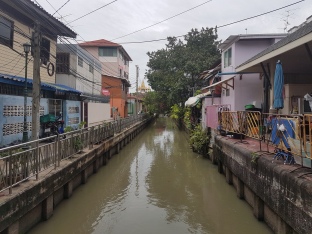 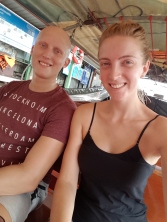 Siam Paragon was a huge shopping centre which we didn’t spend a lot of time in because of our weirdo shopping phobia (joking!). They had a massive e-sports competition going on within the mall where there were thousands of young people crowded round a 100+ inch flat screen TV. Victory Monument was a roundabout statue that represents the Thai victory in the ‘Franco-Thai’ War, a brief conflict waged against the French colonial authorities in Indo-China, which resulted in Thailand annexing some territories in western Cambodia and northern and southern Laos. These were among the territories which the Kingdom of Siam had ceded to France in 1893 and 1904, and nationalist Thais considered them to belong to Thailand.

The Giant Swing…how they can even call it a swing I don’t know. They got rid of the swing part so we basically went to see 2 big red poles – so don’t stress to try and see it. Trust us, it really isn’t anything special.

The Rommaninat Park was full of creepy looking people so we entered and exited as quickly as possible. We got a local ferry boat down the canal to Phanfa Bridge area. We wandered around but didn’t stay for too long. 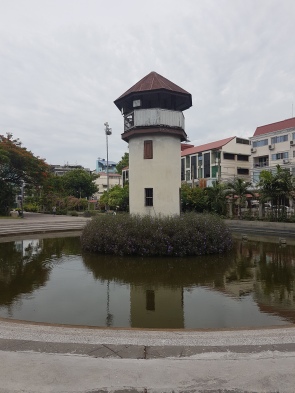 Tip: When sightseeing in Bangkok area especially, there are many scammers. People will come up to you and just be acting friendly, but then it turns out that they are tuk-tuk drivers who want to get you into their tuk-tuk, but they will turn angry if you say no. One man pretended to fall off the kerb in front of us and fell into us, and then started being friendly asking where we were from etc and then started giving us directions and following us. We told him no and luckily, we got him away before he started getting angry. We saw another couple get caught by a scammer because he wandered over to the couple and asked them for the time even though he was wearing a watch. He then started talking to them and asking what they were doing etc. Always be careful because they aren’t ‘just being friendly’. We don’t want to put anyone off Bangkok, or the rest of Thailand for that matter for reasons like this, just as long as you know then happy sight-seeing. Also, when going into certain attractions such as the Wat Suthat, then tuk-tuk drivers will sit outside and tell you it isn’t open, they hope to get you and take you around to somewhere else, gaining business from you.

After doing some sightseeing we went back to the hostel to freshen up, have a power snooze and grab some dinner. We went back to Tesco food court and we stupidly ordered green curry with basil. I can only assume that what they mean by basil is actually chilli. My mouth was on fire and so was James’. I couldn’t actually eat my meal so James had 2 plates full of this mouth-firing dinner and he looked like he had the severe flu. Eyes red and watery, his top lip looked like red lipstick gone wrong and his nose running like Niagara Falls. It was not a good look, but what a champion for eating both dishes.

We finished dinner and back on the train to go and check out the Benjasiri park. It was so peaceful and the locals were going for their evening jogs.

We sat there for a while overlooking the lake and observing the expensive-looking properties and enjoyed our time there. It is worth seeing if you are in the area. After that, we went to check out Soi Cowboy (red light district, a.k.a Ladyboy street) which was interesting, to say the least. I will admit, a big shout-out to the Thai Surgeons because their work is impressive (visit Soi-Cowboy and you will know what I mean by this).
We had a long-tiring day so we went back to the hostel. It’s fair to say we got our monies worth on the BTS train pass, but after a long day with a long of walking it was time to call it a day.