We flew from Bangkok to Phuket costing us £20pp (Cheaper than getting the train into London!), this was a better option because the bus journeys were very long and understandably Mum & Dad didn’t really fancy a long bus journey. We happily got a plane and arrived in Phuket at around 15:30, giving us plenty of time to still enjoy the evening. We ordered a Grab Taxi (Asian equivalent of Uber) and were off to the hotel which cost us 1000 Baht (about £22) for all of us.

Our hotel was situated between Karon Beach & Kata Beach and the journey took about 1 hour. We got to our hotel and we loved it! We had been given a free room upgrade with a pool & sea view and the views were beautiful.

We got settled in and went for a snack and some drinks before then freshening up and going out for some proper dinner. When everyone was ready (and smelt better) we wandered down the street and came across a lovely looking restaurant called Kata Villas. We were shocked to see how cheap the food and drink was, where we could get a cocktail jug for 129 baht (just under £3) so we took full advantage. After all mum & dad were on their holiday and it would be rude not to join in. There were fantastic food deals too, and what was even better was that the food was lovely! We tucked into dinner and then walked further up the road and found a decent restaurant that was doing any cocktails for 100 Baht (£2.50), this was just getting better! We didn’t continue our bar crawl that evening because after travelling we were pretty tired, but we were certainly saving ourselves to take full advantage of the cheap drink deals.

The next day we woke up and decided we would have a day full of exploration. It started off absolutely chucking it down but after we had breakfast it had stopped luckily. We wandered around Kata Beach, and went and sat and grabbed a drink, watching the world go by. 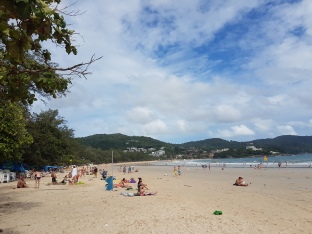 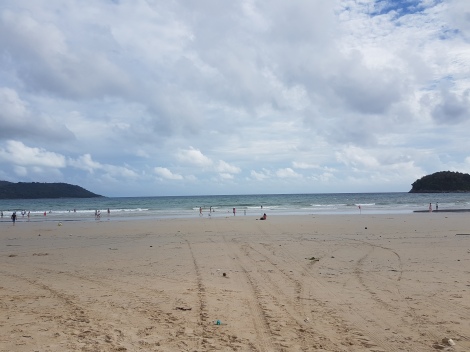 So far what we had seen of Phuket we really liked it, we especially enjoyed the cheap food and drinks. After sitting on the beach for a short while we decided we would go back and have a dip in the lovely swimming pool.

At one point, it must have looked like we were having a photoshoot, we were taking a lot of photos trying to get underwater photos without looking like we were drowning or in pain.

We spent the rest of the afternoon just chilling and sipping on a few cocktails. We got ready and went out for some dinner and I discovered that swallowing chlorine water makes you very poorly (obviously, and no I didn’t do it on purpose). Einstein (James) threw me under the water when we were swimming and I swallowed a fair amount. So, another night I was unwell so we didn’t make it a late one.

We woke up and agreed we would go and see the Big Buddha and the Receptionist at the hotel warned us and said we can only do it when the weather is okay because it is hard to get transport up the hill when it is slippery. But the sun was blaring and the sky was blue so it was a perfect day to do it. We ordered our taxi and began our journey. 15 minutes in and the clouds were over us and the rain was falling, hard. Asia weather really is so unpredictable. We were half way there and it was too late to turn back now so our taxi driver powered through and we made it to the top. 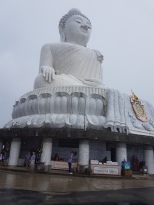 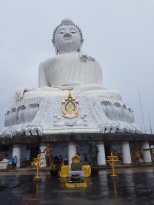 The rain was horrific, a literal rainforest-type downpour. We had an umbrella and walked to the top and this was the result.

Despite the rain, the attraction was great to go and see so definitely visit it if you go to Phuket. We clambered back in the taxi soaking wet and I don’t think the driver was impressed that we drenched his car. We got back to the hotel and the rain had stopped (typical) so we went for a dip in the pool. We got ourselves ready and hopped in a party tuk-tuk ready to visit Bangla Road.

Quite literally a party tuk-tuk with loud music blasting, we felt like we were in our local nightclub. It was so funny and all 4 of us were dancing away! (Don’t worry, we don’t actually dance like that!)

We arrived and went around the backstreets to a street food stall and grabbed some dinner. It was delicious and so cheap. We then wandered around to Bangla Road and it was crazy. There were girls (I think?) dancing on poles, people offering us ping pong & sex shows, lights flashing on every corner of every bar, It was so busy and I’ve never seen so many drinks offers down one street – it was like Christmas had come early.

It was an experience, although not one we would necessarily want to repeat. We had a few drinks and had enough for the night so jumped in a private car back to the hotel and into bed.