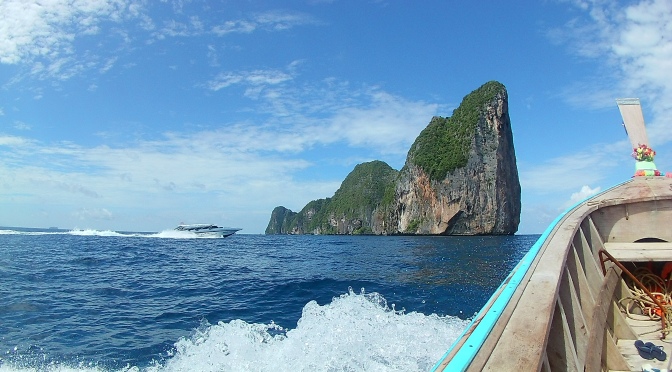 We arrived in Phi Phi, absolutely hammering it down with rain, of course. We grabbed our bags and slid off the boat looking like drowned rats. We walked through the maze of the Phi Phi streets and found our hotel. Our first impressions we weren’t overly impressed, it was definitely not what we expected giving off an incredibly strong ‘Magaluf vibe’ where it seemed the population of young travellers would flock there to drink buckets and walk the streets.

We got to our hotel so very relieved that we could finally lay down. We quickly met up with Ollie & Lauren and had a good catch up – the guys were reunited at last (you could tell they were relieved). We had a nap, got ready and went to dinner. They took us to a local restaurant where I had a lovely pasta dish and James demolished a calzone. We had a low-key evening because they were hungover and we still didn’t feel right.

We booked a trip for the following day which was a half day tour to Maya Bay, Monkey Beach and snorkelling. This cost us just 300THB pp (£7). But if you wanted to get off the boat at Maya Bay then you had to pay the National Park fee of 400THB. This seemed like a bit of a joke that the fee was more expensive than the tour itself but hey ho. It was only me and James because the others had already done the full day tour when they were waiting for us.

We were up at 7:15 am and thankfully feeling a lot better. We were with a decent group, no other English people yet the whole group still spoke English which was helpful. We began the tour at Maya Bay and it was beautiful, we realised that where we were, was the photo of our desktop background when we were at work. Except, it was a much better feeling being there rather than sat at a desk dreaming over a photo.

We walked around the National Park & it was so worth getting off the boat to explore. After an hour of being in paradise, we jumped back on the boat, had a few cheesy photos on the tip of the boat only to be disturbed by a creepy man asking for a photo with me. No thank you. 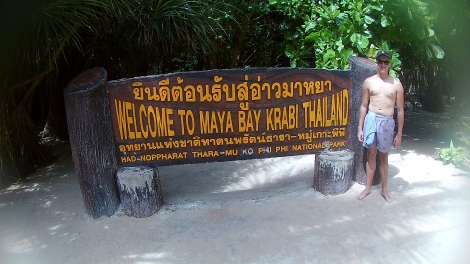 We shortly departed paradise and went snorkelling and as a first-timer, I found it hard to get used to breathing, as ridiculous as that sounds. James however, he was off and joined the professionals whilst I tried to stay afloat clinging onto the ladders trying to sort out my mouthpiece. Unfortunately, we didn’t have much time in the water, especially when we were trying to sort out my broken mouthpiece for about 10 minutes. We saw some beautiful coloured fish and even a snake which followed James up to the boat and was hanging around by the ladders! We had some lunch on the boat and then drove round to see monkey beach. They looked vicious, but would only attack if you were annoying them with food, so obviously, we made sure we took nothing they would want to steal. We even took our float off the camera in case they mistook it for a banana. We tried so hard not to get attacked by a monkey, but instead, we both got stung by jellyfish.

Back on the boat and we were off back to Phi Phi. That evening we got ready and went out for dinner with Ollie & Lauren (Lollie) and then went to a bar where we played beer pong, or should I say cocktail pong. The guys sadly won. After that, we went to Reggae bar where they had Mui Tai fighting for random people. It was a good laugh, although it did get a bit spiteful at times. 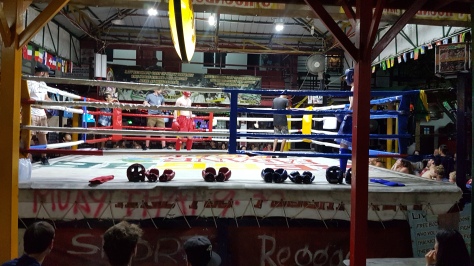 If you ever visit Phi Phi then definitely check out this bar because it is different and excellent entertainment. We grabbed a cocktail bucket from the street and walked to the beach where we watched some fire shows & Lauren participate in a skipping-rope competition and she was for sure one of the best – Team Lauren!

We were quickly distracted by the small sand island being formed into the sea, we stood there for a while dancing away with our buckets and just laughing, appreciating each other’s company. It was a great night but we knew we were up early the next day to catch a ferry so we didn’t make it too late. We said goodbye to our tiny room and we were glad to be leaving. We stayed at B Place Guesthouse and we wouldn’t overly recommend it. It was a good location and away from the hustle and bustle but the room was tiny, leaving us feeling claustrophobic.