We got the ferry from Koh Samui to Koh Phangan and it took us only about an hour or so, but we were horrifically delayed and the queues were huge (larger than Christmas Eve queues in Tesco). 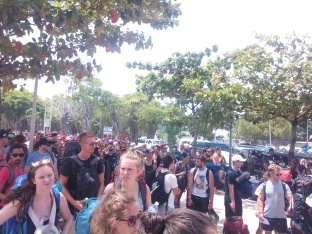 It was quite a joke but we made it to the island eventually. We jumped in a taxi shuttle which was 100THB pp and the shuttle pretty much runs all around the island for 100THB pp, so make sure you don’t get done by the locals trying to sell private taxis for a higher price.

We got talking to a couple on the ferry and swapped numbers and arrange to meet at the Full Moon Party the next day. We just arrived at our accommodation and it was quite literally on the beach. 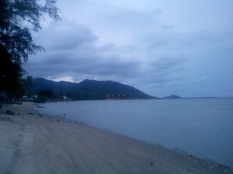 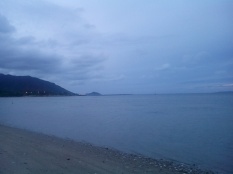 It was such a lovely place and everything about it was perfect. We stayed at Zen Zi Beach Rooms and we would recommend it thoroughly. It was about a 15-minute taxi ride away from the party so it wasn’t too close, nor too far.

Just as we arrived I dropped my phone on the tiles and broke my phone. We were so gutted because we felt like recently nothing seemed to be going right for us. R.I.P phone. I just assumed I would put up with using my iPad and James’ phone for the next month until we go home. We went to go out for dinner, I was given the menu and James went to the toilet, he came out raging with anger. He handed me his phone…he only went and broke his phone too. We couldn’t believe we had broken 2 phones in one day, it was such a bad day and not too much surprise we weren’t in the best of moods after that. We went back to the room and just ate junk food feeling sorry for ourselves. We spoke to both our parents and as usual, they managed to cheer us up. As they pointed out, it’s not a massive issue and at least our health has been okay as that’s the most important thing

The next day we woke up hoping and praying that it was going to be a better day. We chilled on the beach for the morning and went out to get ourselves some new phones and some Full Moon clothes. £150 down but we had 2, not-so-great phones. We headed back and had a long afternoon nap so that we were ready to party that evening. We had conversations with James’ family about us meeting them in Florida, we looked at flights for ages and ended up booking them. We booked flights from Kuala Lumpur to Florida, then coming back to Kuala Lumpur to continue our travels. We were so excited and the Full Moon Party almost felt like a celebration!

We got ready, face painting done, had some drinks and we were off to meet our new friends at a bar. 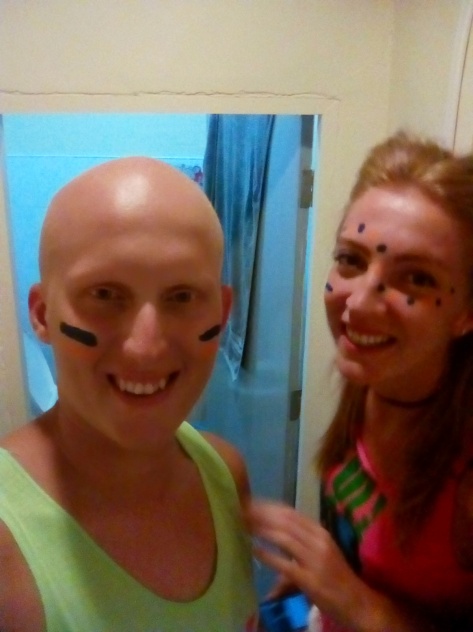 We met them at a pool bar and it was a perfect place for pre-drinks, great music, good happy hour on drinks & even a pool table. There was a group of about 8 of us and we all got on so well, it was great. We went to the Full Moon and were so ready to explore. In case anyone reading this doesn’t know what it actually is, it’s a massive party on the beach with over 20000 people which happens once a month when there’s a full moon. We ended up with a massive group, just drinking and having a laugh whilst taking in the crazy vibe. It was mad and there are no words to even describe the experience, it was fantastic with the yet again great company. It got to 4:00 am and we were super tired and we were both ready to go back, so off we went. James sat on the beach to see the sunset (although sadly there was no sunset) and I went to bed. A great night, and a lot of memories we will always remember.

The following day we slept in until 12 pm and pretty much just spent the day recovering. But of course, that didn’t go to plan. My credit account was subject to fraud and over £400 was taken from my account. I was on the phone to my bank and had to get my card cancelled. When will we ever have things go right? Annoyed yet again, but we just had to get on with it -I guess the rest of the trip is on James! (Only joking!)

The rest of the day we tried to chill out and next thing we know its dinner time, we went to 7/11 and got some dinner from there – not the healthiest of days you could say.

We were sad to leave Koh Phangan but it is made for people who love to party and after the Full Moon we were done with partying and drinking for a long time.